“I became a FOPP volunteer in 2016 to help run Storybook Dads, which enables prisoners to record bed-time stories for their children at home.  Although I occasionally help with Storybook Mums on the female side I am usually based in the male library.

There are over 200,000 children affected by parental imprisonment in the UK and such children are three times more likely to suffer mental health issues.  The idea of Storybooks is simply to help prevent imprisoned parents losing contact with their families.  Over half of imprisoned parents do lose contact.  But those who keep in touch are up to 6 times less likely to re-offend so it has the potential to benefit the children, the prisoners and the whole of society.  Although aimed primarily at parents, we can also record stories read by grandparents, siblings, aunts and uncles, provided there are no access restrictions in place.

We record stories on a studio-quality digital recorder (in stereo).  They are then edited to minimise background noise and take out any stumbles from the reader and any interruptions from me.  Following this, the editor will typically add background music and a host of life-like sound effects that really make the story come alive and it is then copied to a CD for sending out to the child’s carer.

Of course, many people in prison have never recorded any audio before and are often quite nervous at the prospect and some just have poor reading skills and will need frequent prompting.  When the reader arrives for his appointment, I sit down with him and ask about the child who the story is for, and spend a few minutes explaining how we are going to make the recording.  I tell him that I will be with him in the room during the recording, but I want him to imagine he is alone with his child and to be as natural as if just they were in the room.  I assure him that nothing I overhear will go outside the room and that I will explain what he must do every step of the way, and generally put him at ease.

The relationship between a prisoner and me is different from his relationship with a prison officer, and I like to think this puts him at ease so that we end up with a more relaxed recording.  I am always flattered by the profuse thanks they give once we have finished the recording, but I often say that I’m pleased they have found it helpful or enjoyable but that I really do it for their children!

It can be an emotionally exhausting experience for them, especially when they are saying goodbye to their child at the end of the story and I have had many big tough men in floods of tears at this point.  When this happens, I just assure them again that nothing I hear will go outside the room and we just sit and talk for a little while, usually about their children or partners and how much they are missed.

The audio editing is all done on site, often by one or two prisoners who have the appropriate skills, 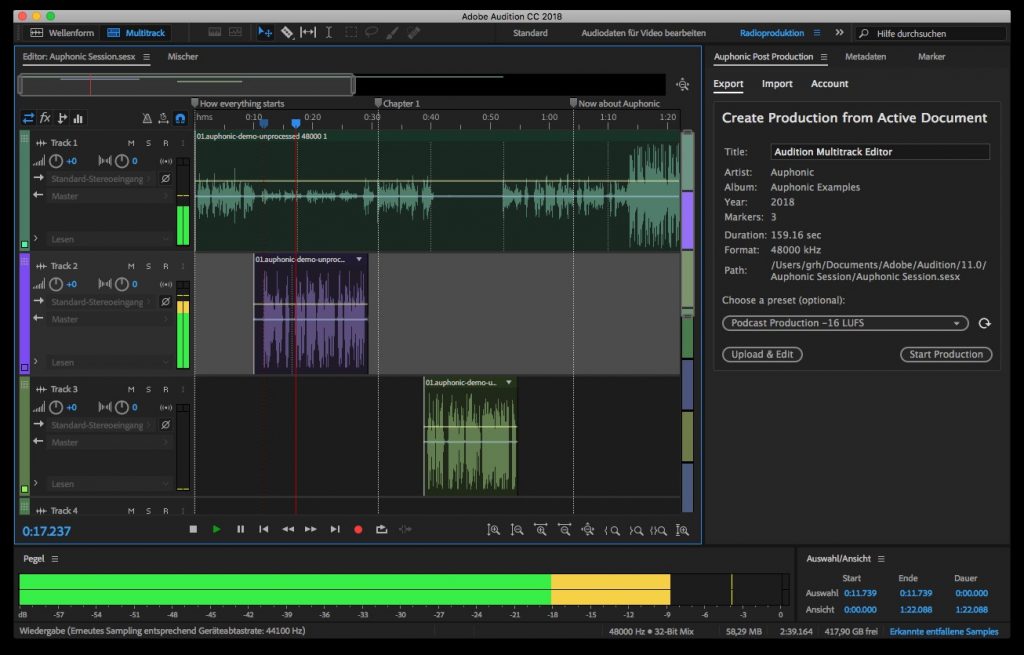 but on occasions I get to do some of this work, too.  The editing is done on a computer running Adobe Audition software as shown in the typical screen-shot, above.  Whoever is responsible for the final editing, it is always very rewarding when someone tells me a few weeks later that their child was thrilled to get such a brilliant story!”

Follow the link to hear a short Storybook example.